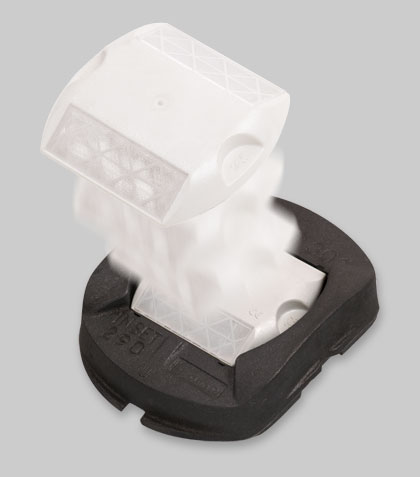 As part of a resurfacing scheme for Derbyshire County Council, Roadcraft’s roadstuds have been a major contributor to the reduction of collisions and casualties. There have been no reported traffic incidents on the Derbyshire to County Boundary with Cheshire route since June 2010.

“The WJ LinkLine Group has carried out improvements to the white lining and road studs following a carriageway resurfacing scheme on behalf of Derbyshire County Council’s Traffic and Safety Team and Highway Maintenance Teams. The package of road safety enhancements was in an attempt to further reduce the number and severity of collisions and casualties that have occurred along this route. Since the specialist Weatherline white lining and Roadcraft studs have been installed along the route there have been reductions in collisions. In the 3 year period prior to the measures there was a fatal, 3 serious and 5 slight incidents along this section of the route. After Weatherline and Roadcraft studs were introduced in June 2010, in association with a new carriageway surface and average speed cameras there have been no incidents to date (the most recent search period available being the end of March 2011).

Derbyshire County Council continues to be pleased with Weatherline and the new studs as they are highly visible during the hours of darkness and perform well in wet conditions. This is advantageous on unlit rural roads with bends, gradients and cambers and as this route has been associated with EuroRap in previous years as being one of the most dangerous routes in the country, it is essential to make every effort to maintain the route to a high standard. In summary, Derbyshire County Council would not hesitate in recommending these products to others and are pleased with the successful results and outcomes that have been achieved.”