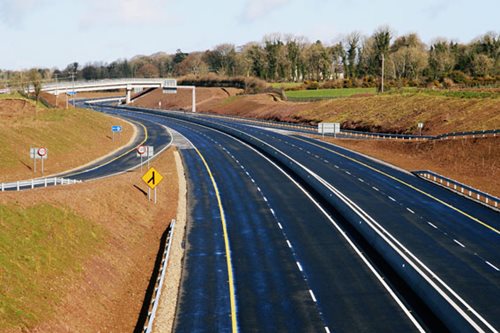 3M™ Marker Series 290 roadstuds have been used on a 24km stretch of brand new motorway in Ireland, which opened in March 2010.

The construction of a major inter-urban route connecting Dublin and Waterford is a key part of the Irish government’s strategy for economic growth and road safety improvements. This project moved one step closer to full realisation in March 2010, with the opening of the M9 Waterford to Knocktopher motorway. This continuous section of dual carriageway runs between the N25 link road near Grannagh in County Waterford and a grade separated junction to the west of Knocktopher, County Kilkenny.

The entire stretch of the new road has been fitted with approximately 9000 301/290 3M™ Marker Series roadstuds. Supplied by Fleming and Co, the 301/290 3M™ Marker Series describes the combination of a 3M Series 290 stud encased in the 301 metal housing designed by RoadCraft Safety Products Ltd and Fleming & Company. This is a combination that offers a high reflectivity and superior durability.

Durability is a virtue that takes several years to appreciate, of course, although the 301/290 combination is well proven in countless application elsewhere. However, the brightness of the 3M 290 Marker series road studs is making an immediate impression. Mark Phelan, Construction Manager for BAM Contractors says, “I travel the road daily and I am extremely impressed with the 301/290 stud, especially its night time performance. We looked at several options and chose the 301/290 for its performance and reliability. I would have no hesitation in using or recommending the 301/290 for future projects.”

Available in white, amber, red and green, the series 290 stud features a tough polycarbonate lens utilising the same microprismatic technology that 3M uses on its high performance sign sheeting. The ceramer-coated lens resists abrasion and cracking, while the inner-ribbed contour of the stud is shaped to dissipate tyre impact, increase strength, and reduce damage. The extra protection afforded by the 301 housing, guarantees many years of excellent reflective performance from the studs, even on the busiest roads.