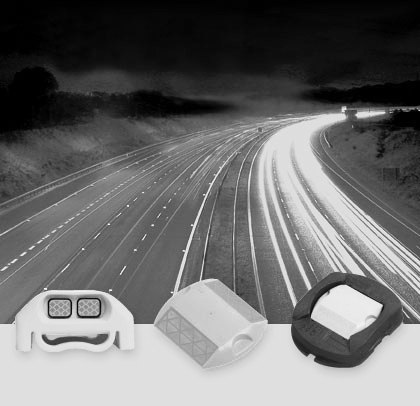 Drivers in North West Scotland now have something to catch their eye that’s almost as incredible as the scenery.

The North West of Scotland boasts some of the UK’s most breathtaking road journeys. From the highlands and lowlands of the Trossachs, to the snow capped peaks of Breadalbane and the sea lochs of Argyll, the roads of the region skirt around and through a landscape of stunning variety.

It’s also a region that receives its fair share of snow showers, so for Scotland Transerv, the operating company responsible for the managing and maintaining the trunk roads in North West Scotland, it all adds up to a network with some interesting challenges.

With such a beautiful landscape to look at during daylight hours, any driver could be forgiven for taking their eyes off the road just once in a while. But, at night, Scotland Transerv has found a road stud to keep a driver’s focus firmly fixed on driving safely.

The stud of choice is the 3M 290 non-depressible road stud mounted in a 301 housing from Roadcraft and Fleming. With the 290 stud, reflective values are well in excess of the requirements of BS EN1463 Part 1, thanks to the use of 3M microprismatic reflective technology. Strength and durability come from the distinctive inset cast iron housing of the 301 unit, and the use of high-impact-resistant polycarbonate resin to construct the 290 stud.

The inner-ribbed contour of the stud is also shaped to dissipate tyre impact, and the tough polycarbonate reflective lens is further protected by an abrasion resistant coating. In fact, the combination has already proved itself capable of resisting the snow ploughs that patrol during the winter.

The stud has also withstood attempts to damage it deliberately! Scott Walker, of installation contractors Markon, takes up the story, “From our perspective, this is the best road stud there is. I tried to destroy the lens on the 290 stud, and it resisted everything I threw at it. I hammered the lens, but it stayed intact. Of course, drivers aren’t going to see how strong it is, but they’re sure to notice the brightness. Our first installation was on the A84 between Stirling and Callander. I couldn’t believe how bright it was.”

Tony Welsh of Scotland Transerv is equally impressed. “We’ve used these studs for about 18 months and they’re very impressive. Given our weather up here I did wonder how well they’d stand up to gritting and snow ploughs, but there have been no issues so far. We’ve got six more schemes lined up in the next few weeks where we are specifying that the 290/301 units be used.”

Scott’s preference for the 290/301 combination extends beyond their superior performance in situ. He also prefers the fact that they are easier to install. “There’s less waste when you drill out the ground, and because of their size we can carry more on a vehicle. I’d say we can lay about 50 more in one day than we can with other inset studs. In my view this stud is 100% better than anything else on the market.”