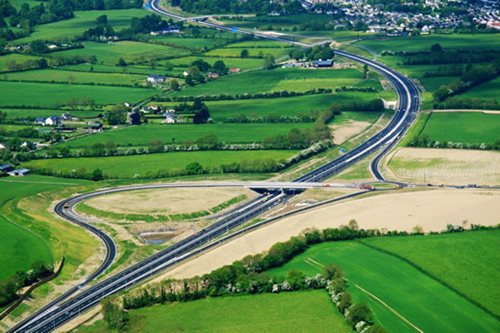 The largest motorway project in the history of Ireland has recently opened and 3M has 30,000 reasons to be proud of its involvement.

For any large-scale civil engineering project to open on time, it’s clear that every stage of the build must run smoothly and efficiently. So when the M3, which crosses from Clonee to Kells, was opened ahead of schedule on June 4th it represented a major achievement for all concerned.

The 61km stretch of new road, mainly motorway with some dual carriageway, was funded in part by the Irish Government and in part by the European Union. Delivered through the NRA’s Public Private Partnership mechanism, it will be operated by Eurolink Motorway Operations Ltd M3. Along with its 12 km of link roads, 35 km of side roads, six junctions, 34 overbridges, 29 underpasses, two railway bridges and three major river crossings, the project features more than 30,000 of the 3M™ 301/290 Marker Series Road Stud.

Noted for their ease of installation and durability, the 3M 301/290 road stud combines a Roadcraft & Fleming 301 metal housing with a 3M Marker Series 290 Reflecting Road Stud.

According to Dave Schuller, Operations & Maintenance Manager at Eurolink the 3M 301/290 road stud combination was the obvious choice for this prestigious new project. “It was clearly important to get the job done on time, so ease of installation was a factor for us and our sub-contractor. However we also needed a stud that was going to be a star performer. With their proven performance, reliability and durability we knew that the 3M 301/290 road studs would look superb from day one, and stay that way for many years to come.”

As one of the contractors responsible for installation, Declan McStay of Bridgepoint was best placed to judge first hand how easy the 3M 301/290 road stud is to work with. “We much prefer it to the depressible road studs because we can carry more on a vehicle to begin with. That gives us an immediate time saving, but it is also much quicker and easier to install as it is supplied as a complete unit with the stud already stuck to the housing.”

Dave and Declan also acknowledge that its performance is better than that of a glass depressible road stud, thanks of course, to the exceptional reflectivity of 3M prismatic reflective sheeting, a fact they are sure to be grateful of every time they use this newest stretch of Ireland’s motorway network.

Highway Markings Ltd, the other contractor responsible for installation, have been installing embedded road studs for 27 years. This is the second time they have worked with Dave Schuller and Eurolink on a major motorway project. Danny Murphy of Highway Markings comments “the 3M 301/290 stud requires no preparatory work and are quick and easy to install. We achieved consistently high production rates throughout our sections of the M3 project. The exceptional performance of the 3M 290 road stud combined with a metal casing will provide a safe driving environment during the hours of darkness where wet night visibility of the road studs is required.”