The European Standard for Road Studs

Regulations on the use of road studs on public roads in the UK changed with the publication of the European standard BS EN 1463 and its adoption into a newly printed Traffic Signs Regulations and General Directions (TSRGD) 2002. Amendments to TSRGD 2002 were released in 2008 and again in 2011, however following a government consultation in 2014 the Traffic Signs Regulations and General Directions 2016 were made on 16 March 2016, coming into force on 22 April 2016.

With the legal adoption of BS EN 1463, reflecting road studs used on any public road in the UK, must be tested and certified. Acceptable definitions and classifications for use in the UK are detailed in TSRGD which is a statutory instrument and has the force of law.

BS EN 1463 has two parts: Part 1 - Initial Performance Requirements – tests are conducted within a laboratory and Part 2 - Road Test Performance Specifications – which is a 12 month road test. As each part of the test concludes, manufacturers obtain a British Standards Institution (BSI) test report verifying the tests carried out, the results are recorded on data sheets for tests and the conclusion is the classification awarded as a result of the test. The BSI is the national standards body for the UK. In most cases a test result declaration certificate is issued to allow the manufacturer and distributor of the product to prove compliance to the standard. BS EN 1463 may not mention the method of fixing but this must be clearly identified by the manufacturer. 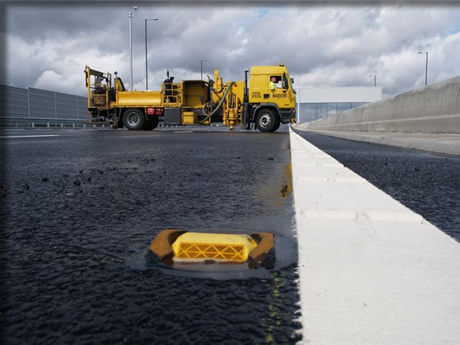