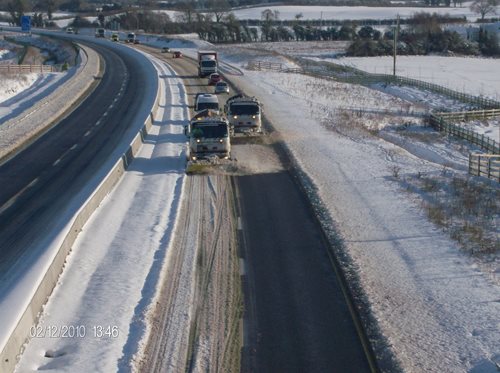 The harshest winter for many years meant an early test of strength for 3M road studs in Ireland.

None of us will need reminding that November and December brought traffic chaos to much of Europe, with snow and freezing temperatures closing airports, halting trains, and blocking many major highways, never mind the minor roads.

It was a difficult couple of months for everyone involved in highway maintenance, and as it happens, a testing time too for the products on our roads.

Conditions on the M3 in Ireland were particularly challenging. Snow fell first on November 21 and December 9th followed soon after by a second bout of snow and a further 4 days of round the clock snow ploughing. Temperatures fell to a rock-solid minus 17 degrees celsius, and the struggle to keep this important toll-road open was a big test for the maintenance crews and their equipment.

It was also a big test for the 3M™ Marker Series 290 Reflecting Road Studs, that were installed in 301 cast housings from Fleming & Co, which took a continuous battering from the snow ploughs day after day.

The M3 runs from Kells to Clonee (just outside Dublin) and is operated by Eurolink Motorway Operation M3 Ltd. Operations Manager, Dave Schuller takes up the story.

“Throughout this period the motorway required continuous snow ploughing 24 hrs a day. I am pleased to say the road remained open throughout this extreme weather and no road studs were lost due to the winter maintenance operations. The studs had to endure a lot this winter and I admit I was nervous as to how they would perform under such harsh conditions. When the snow cleared and we checked the road and studs I was extremely pleased to see that no studs had been lost. If we had chosen a different product I know I would not be in the same position I am now and I would be looking at a big repair bill.”

The conditions were indeed harsh, but the 3M 290 Road Stud, embedded in the 301 metal housing designed by RoadCraft Safety Products Ltd and Fleming & Company is certainly built to last. The cast housing comes with a 3M 290 Road Stud already inserted to form a non-depressible road marking, ready to be embedded in the road. It is a combination that offers high reflectivity and superior durability. Bright and strong, the 3M™ 301/290 Marker Series Road Studs have certainly proved their worth on the M3 this winter, and everyone is confident that they will do so for many years to come.